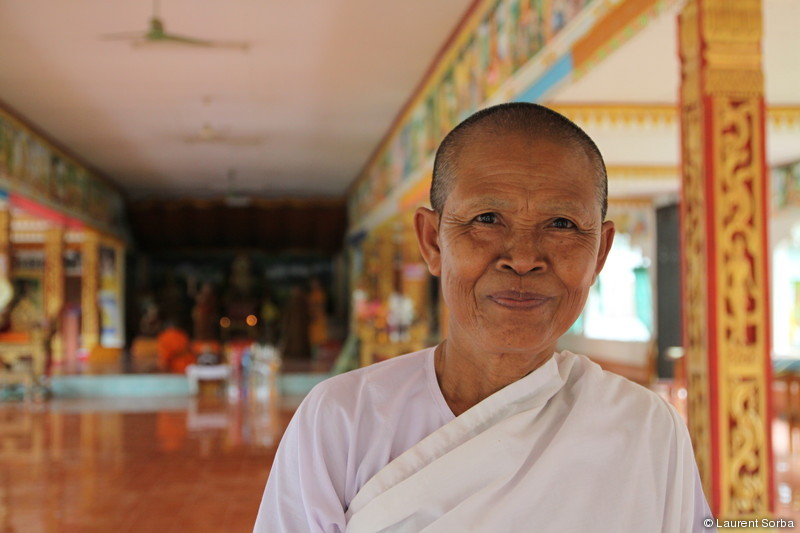 A tip for travellers: The Poipet land border needs you some precautions or simply to avoid…
This border is not the safest one.
Our bus stopped at a fake border with real customs officers. They entered in the bus and asked the people for visa and passports! They’ve overcharged my travel mate for her Visa… Just be careful don’t trust anyone even (or especially) officers. The risk is mainly to be scammed (money).
=> An easy way to avoid this is to ask for an electronic Visa (e-visa) on www.mfaic.gov.kh/evisa: you will pay $25.

Welcome to Cambodia! The first impression was not so good. We finally found someone to travel with, an Israel guy living there, in a shared car to Siem Reap ($10 each). Tank fill up in Cambodia!

The car stopped in the middle of the ride! Wahoo what happens now! We finally changed for another car and driver. Another stop to fill up the fuel tank. And a stop near Siem Reap to meet a tuk-tuk driver 😛 and finally we arrived at Siem Reap under water during night near 7:00pm.
Ouf we arrived! We just had to find a nice and dry accommodation and we found ‘Mitri Guest house’ for $5 fan+hot water for two. Perfect! And then a restaurant serving a Cambodian BBQ (meat, fish, vegetables and rice) and $0.50 beer pints. It compensated for our hard day!

Small tour
Very crowded, but totally impressive: huge and contains a lot of beautiful temples (Angkor Wat, Angkor Thom, Ta Prohm -Tomb raider temple-,…).
I came across monkeys, elephants, thin cows in a tropical jungle with its wildlife and its very specific noise …
Stretching over some 400 square kilometers, including forested area, Angkor Archaeological Park contains the magnificent remains of several capitals of the Khmer Empire of the 9th to the 15th centuries, including the largest pre-industrial city in the world (source wikitravel).

Return at the ‘mitri guest house’ at Siem Reap with some electricity interruptions because of the flood!
We went out in the animated street with western-like pubs,.. not really authentic but it was not bad to drink a glass. Some children came near the pub to dance in the flooded street.

Thursday 15
Big tour
I walked some time in the forest, banana & coconuts plants, rice fields and between light wood accommodations where the population is more friendly and smiling.
The night, we decided with Catherine to walk outside the touristic area, but we were surprised by the heavy tropical rain. We were very close to a new Buddhist center.
Some children suggested us to come with them to be sheltered from the rain. We were very well welcomed, they asked a lot of questions about our countries and offered to eat a porridge.
They told us that the same thing happened the previous week with two Japaneses 😉
Then once the rain stopped, we went back to the less authentic Siem Reap where we had a rendez-vous with other CSrs.

Friday 16
Day bus to Laos ($24)
Pick-up at 5:15am to the bus station.
Trip along the fields of bananas, coconuts and hemp! With some local music, karaoke…

Next: Laos from the South to the North, along the Mekong river